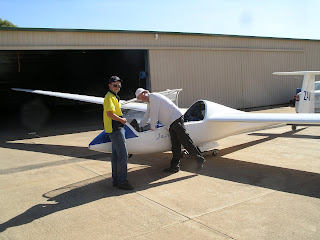 Terry & Jake putting the Janus to bed after an enjoyable flight together this afternoon. 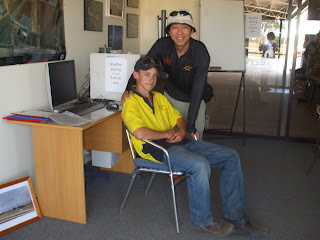 Li, above with Jake, is looking forward to coming back to Tocumwal again. 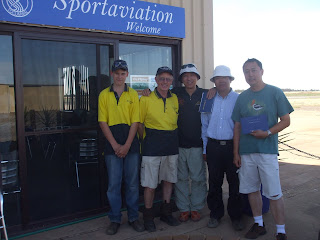 Farewell to Li, Shang & Andrew (above with Eddie & Jake) who are all heading back to Melbourne tomorrow then home to China. We look forward to seeing them again in the near future.

Zach had his first taste of the Maule today with Tim at the helm, then later with Eddie. Dave had a good flight in HDK while Terry and Tim took to the skies in the Janus. Later,Terry flew with Jake in the Janus as well. Li and Shang both had a great time in the Blanik and IS28 respectively. Tonight, Andrew is taking everyone out to dinner to celebrate a great time flying in Tocumwal. Temperature at 1500hrs a pleasant 35.5 degrees.

Posted by SportAviation's Blog at 6:32 PM