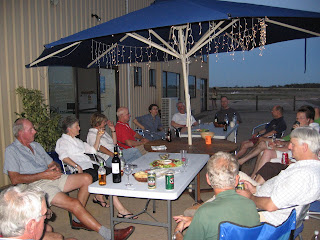 Hi All,
Sorry for the lack of updates, we’ve been very busy and having a few technical web difficulties. We are now back on line.
It's been a fantastic few weeks, with wave, long 7 hour flights, climbs to 13,000 ft and visitors from around the world including Germany, Japan, UK, Czech Republic, Hong Kong and Finland. Added to this, our wonderful Australian locals have had a fantastic time. Everyone is enjoying the friendly environment and relaxed atmosphere.
See below some recent photos.
Posted by SportAviation's Blog at 6:26 PM

January 9th 2008
Great news! The roof went on our new hangar today. The doors are expected to arrive by the end of next week. Forecast for tomorrow looks very big. David, Kari are planning big tasks. Also Terry, Ryan and David Brustman are arriving tomorrow in anticipation of some classic Tocumwal soaring weather.

January 8th 2008
Much quieter day today with a cool southern, so pilots are making amendments to gliders and planning tasks for later in the week when conditions are expected to hot up (40 degrees) by Thursday.

January 6th 2008
A through line moved through our area today. A 100 km band of cumulus at 11,000 slowly moved to allow some fantastic soaring conditions up and down. The trough line David Williams and Tim Cooke took advantage of this and flew the IS28 out to where Tim outlanded a few days before and viewed the area from a cool 10,000. Kari elected to stay on the ground, but the Lapin family from the La Trobe Valley with the young Ben all taking advantage of the great soaring weather.

January 5th 2008
Another hot day with plans of 1000kms being made, unfortunately they didn’t achieve the big one –but they all had fun trying. Terry enjoyed a aerotow and then came back to try the motor – just to keep it active! When he came home, he also found that Don had sent his son Zavior solo in the Jabaru – well done Zavior. Peter and Ginny also came by to say hello and see all the action.

January 4th 2008
After saying farewell to Nicole and Richard, we had a late start, however we still enjoyed some good thermals and flying with Kari enjoying towing in the Maule. Bob had a great time locally as did Tim and David. Michael enjoyed getting back into the saddle again and even Laurel had a go in the glider after she completed her Bi-Annual Power flying review. We also had a visit from the daughter of a polish flying instructor from many years ago – it was lovely to meet her and show her what her father used to do.

January 3rd 2008
Strong winds didn’t prevent, Kari, David W and David B taking to the air with only local flying available today, so the day ended with yummy pizza from Kelly’s Pub and a few left over beers. Hannas and Utta with her daughter and sister-in law arrived from Melbourne/Germany and Michael arrived from Singapore and spent time non flying time with Otto, Neil and Richard his syndicate partners in the DG 600. (Unfortunately Graeme and Lothar couldn’t get away from work!)

January 2nd 2008
Another day that could have gone either way, some made it back with excellent results, Terry enjoyed climbs to 10,600, Kari got out to West Wylong, David and Tim flew triangles. Unfortunately we had three people outland, with David Williams from Lasham enjoying the dust at Berrigan, Richard enjoying the greenery at the Tupple Station and Kari finding a wonderful big paddock out near Morondah. Michael from Finland and many other visiting pilots from surrounding clubs including VMFG’s camp at Wangaratta landed at Tocumwal for a re launch with the Maule– as although the weather was good and thermals a plenty, we also had plenty of sink and holes!

January 1st 2008
With a temperature of 39, thermals going to 12,000ft in places, distances of 460kms achieved. Richard headed North, with Ingo wanting to enjoy the mountains again. All other pilots kept local and came back late in the day to enjoy the cool river.

We have also had the opportunity to catch up with some other glider pilots with Donald from Lasham dropping in for a visit. We had a few “joy” trial instructional flights with Sam from Poland thoroughly enjoying the experience so much that he came back again for another go! Perhaps we have a new pilot in the making.

December 2007 saw the SportAviation Flying Family completing 750, 890 and many 500’s kms done in the last month. Richard S achieved a personal best of 600 kms, with Kari achieving a 750kms and Chris undertaking a 600, Terry was very happy with his height of 15,000ft, Greg in his Superarrow flying to Mathora and Ray, as is his norm, landed late after a 6 hour flight, however not so late as Ingo, who on New Years Eve didn’t make it back and out landed at a property 20kms to the West after a 10 hour flight! Tim C had the inauspicious title of being the first to outland during the December season, he landed at Peter R, however as no one was home Eddie arrived promptly with the Tug – SportsStar plus and bought him back to Tocumwal.

We had a New Years Eve party at the hanger with plenty of tall stories being told, heaps of food and beer, as Kari promised if he got home after beiong so low, he would shout everyone a beer – he was true to his word.

Eddie and Don with the assistance of Ingo (when required) have undertaken training courses and had a group from Main Land China training up to solo standard in December.

Posted by SportAviation's Blog at 3:57 PM