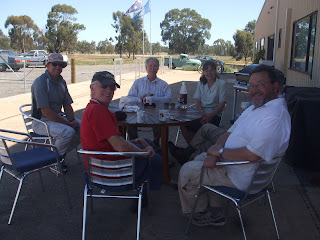 Bill and Jake were kept very busy with launches today. Neil had his first flight for the season in Uniform Echo while Lothar continued his instructor training with Eddie in the Blanik. Farewell to Ralph who enjoyed his last flight at Tocumwal before heading back home tomorrow morning. Grant took advantage of being home alone and also headed skyward. Good to see Neil, Glenda and Dieter who dropped in for a cuppa this afternoon. Also, Michael Summers who called in for a chat with Eddie to see how things were going.
Posted by SportAviation's Blog at 7:44 PM